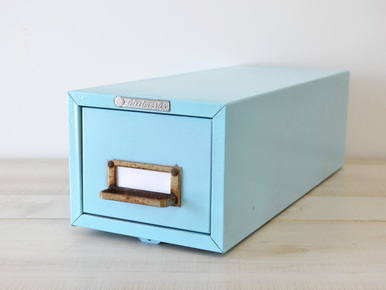 After being out of school all this week for all day or part of the day, I could tell Spicer and I both had some major cabing fever.   We needed to get out of the house!  So I took the day off.  It just made since.   I could tell yesterday everything was wearing thin.  I found myself snapping at Spicer and he was bouncing off the walls.  We played 3 rounds of Trouble last night and even went outside for a bit to the creek behind our house.  But I knew we need a bigger outing for today.  So today we went to the store and purchased materials for his Valentines Day Box.  Then we went to Mr. Gattis and he ate pizza and we played games.  Spicer had enough tokens to get a small transformer.  He had a blast.  We came back and made his Valentines Day box and filled out his Valentines.  It was nice to get out of the house and enjoy the SUN. 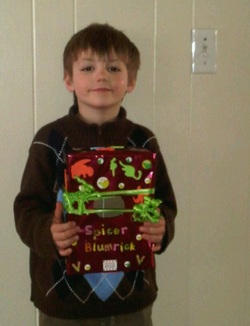 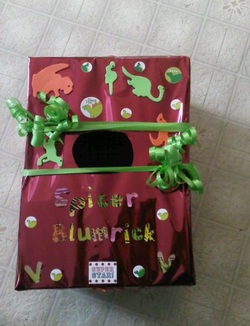 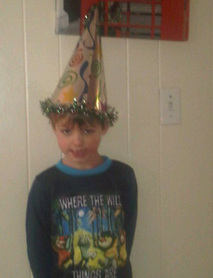 Spicer and I enjoyed day two of his snow day.   We played in the snow again and had a blast.   We also worked on his home work.   Spicer has really worked hard on learning his wall words.  This has been something he has had trouble with in the past.   He was so proud of himself as he rattled off each word on the flash card.  "To, The, Little, Am...."  We also worked on his Math.  We were instructed to find shapes in everyday items.  When it came to CONE he said, "I know what is a cone Mommy."  He ran to the seasonal closet where I keep the wrapping paper and birthday stuff.  When he returned he was wearing a birthday hat.  "See Mommy, this is a cone."  Good Job Spicer!!!! 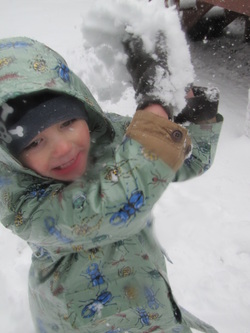 Well it snowed AGAIN.  Spicer headed to school this morning.  I was glad he was able to be there for the morning so he was able to be the pledge leader today on Tiger TV.   We practiced last night and this morning.   He had it down pat.  When he left it had started to snow and by 7:45 it was a mess.  They left school out at 10am and he made it home a bit after 11.   I am sure the bus had to go very slow.  I am not sure if they will have school tomorrow.  Spicer and I had a snowball fight and made a snow cat.  We have 6 inches and more than that in snow drifts.  Snow is pretty but I think we are ready for Spring.  Burrrrrrrr it's cold outside!!!! 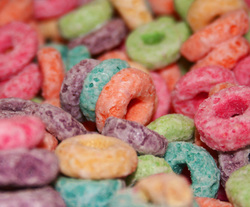 I had a crazy week this week so it was very important to eat breafast at school with Spicer on Friday.  I am so glad I did.   I love eating breakfast once a month with him for IMOM mornings.  He and I really look forward to it.   Spicer was thrilled at this IMOM breakfast because he got to sit by his best friend Jack and he and Jack were choosen to act in the little skit.  Spicer loves being a helper.  He is such a sweet boy.   I am so glad we have these moments together.  I love you Spicer!!! 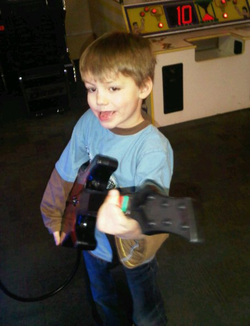 Spicer had a blast yesterday playing games at Mr. Gatti's.  When it was time to turn in his tickets he realized he didn't like any of the prizes for the number of tickets he won.  So the lady explained to him he could save his tickets and open an account there.   I was proud of Spicer for saving his tickets.   After we finished at Gatti's, Spicer played with his cousins.  They played games, had a bonfire, and made hot chocolate.   The weather has been great.  We are headed to LBL this afternoon to do a little hiking and take a look at the elk and bison. 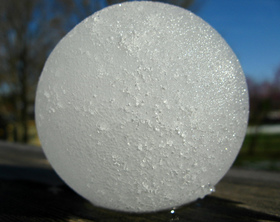 Tommy made a giant snowball today and Spicer was amazed by it!!!   He decided it looked like a big Bakugan.   Spicer had a great day at school today.  Today was his 100th day!!  Time flies!!  In honor of his 100th day of school he had to make a collection of 100 items.  We counted 100 stickers.  Spicer informed me that everyone in his class thought his 100 stickers were very cool.  Friday is Spicer's parent teacher conference and I am excited to hear about his progress.  Game night tonight...Will it be Bingo, Trouble, or Sorry Sliders?  Bingo it is!!!!!!  I love you Spicer! 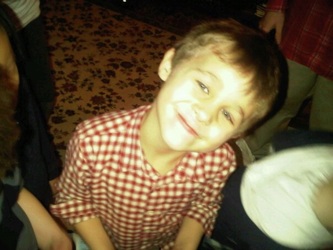 Spicer had a blast last night at Jordan's Birthday.  Jordan had a Scooby Doo theme.  Jordan was able to visit with his half-brother Mathew.   The kids had a blast!  Spicer and I bought Jordan a Scooby Doo game, Scooby Doo comic book, Scooby Doo stickers, and a Sponge Bob Pirate Ship.  Jordan had his two favorite things to eat cake and pizza.   It snowed on the way home.  Spicer kept asking if he would be out of school but I told him it was too warm for the snow to stick.   He seemed ready to get back to school this morning when I put him on the bus. 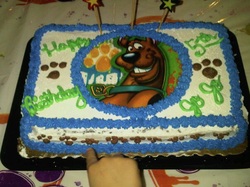 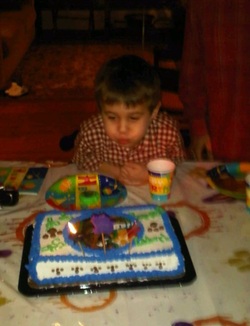 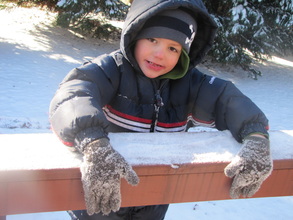 Spicer had a much better day yesterday.  And today of course....no school and snow.  That is just about perfect.  We've had a blast playing in the snow, making snow angels, and snow cream.  When I told Spicer we had no school he jumped in the air.  He was so excited.   He is taking a nap now.  After all the playing he was worn out.  I could tell he was tired because he almost fell asleep on the couch.  Of course he denied he was tired when I said it was nap time.   He is really getting the hang of cooking.  I had him help me make his corn and his chicken for lunch.   He likes helping and I like the idea of him knowing his way around the kitchen. 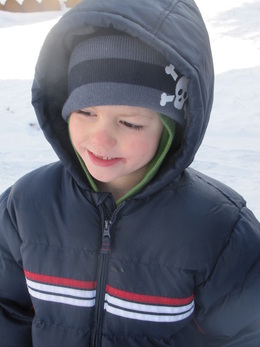 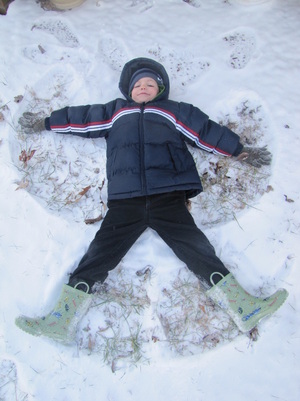 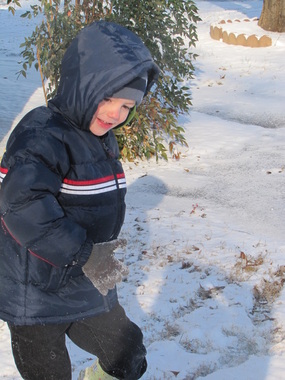 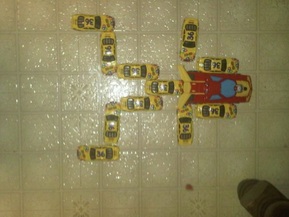 Spicer had a rough day yesterday at school and Kidz Company.  We had a long talk and I think is just a little hic-up and today will be a better day.   Last night when I told Spicer it might snow, he immediately connected it with a snow day.   It is amazing how quick kids make the connection after only having one snow day in December.  Spicer couldn’t watch TV last night so he got pretty creative playing with my old stencils and tracing all sorts of animals.  He even traced a cat and of course identified it as Spike.   He also made a very cool Frog Car with his matchbox cars and transformer.   This morning I reminded him of his tiger rules so I hope he is off to a good day.  I imagine there will be a lot of kids looking out the window today just waiting to see those first snowflakes. 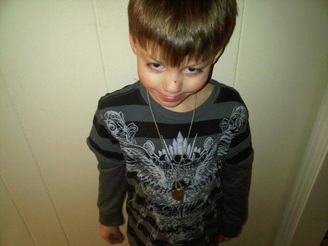 Spicer started Big Boy School this year and has struggled a little adjusting.   But he has made amazing progress.  Last Friday he had a perfect afternoon with 18 out of 18 smiles.  He also appeared on Tiger TV sporting his gold tiger tag seen in the picture.  Spicer is really maturing and I am so proud of him.  Here are just a few Spicerisms on maturity. "Mommy we need to watch the News so we can learn what's going on in the whole wide world."  and "Mommy we need to order this on TV now so I can better organize my toys!!"  I love you Spicer.  I am so proud of you!!